Even as we’re struggling to assemble the pieces of our shattered hearts after Doctor Who‘s latest season finale (RIP everyone), we’ve already got something new to look forward to. A sneak peek at the Nick Frost-featuring Christmas special hitting Space later this year. Frost, best known for his roles in Shawn Of The Dead and Hot Fuzz, is set to pick up where his very brief cameo in “Death in Heaven” left off, taking The Doctor on yet another holiday adventure. It’s Peter Capaldi’s first Christmas special as The Doctor, and with the series pulling in its biggest audiences yet with his debut the pressure to, ahem, deliver is on.

While we’re beyond excited to welcome all those new companions into the TARDIS in time for the holidays, we feel it’s only fair to offer fair warning of what it means to take up with The Doctor.

1. Having to keep up with all the specials and secret clips

To be clear, we would never want to take away from the BBC’s excellent charity work. But you do have to admit the wild goose chase of DVD specials, holiday specials, one-off specials and sneak peek teasers turns the breaks between seasons into a massive sleuthing fest. We get that current showrunner Steven Moffat spends quite a bit of time in the Sherlock universe, but not all of us have those skills.

Just because it exists doesn’t make it true — and there is a lot of Who that exists. From comic books, TV movies and, ahem, other Children In Need specials there have been many cooks in the Doctor’s kitchen. Thanks to the series’ ability to toggle with timey wimey, a lot of that also ends up getting undone (or assumed to have never happened at all). And just when you’ve gone and figured it out, someone will inevitably argue with you. 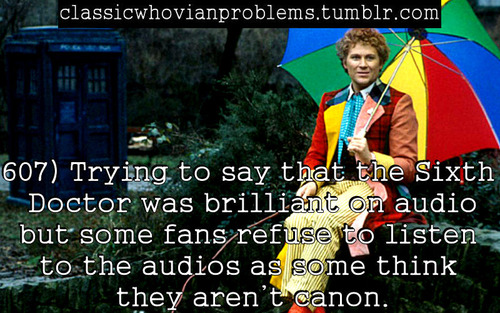 3. Finding out about snacks you don’t have access to

We, too, would love to diffuse a tense situation with the jelly bean-like Jelly Babies. Or even defeat a Dalek with the king of shortbread and jam cookies, the Jammie Dodger. Unfortunately, while Doctor Who’s fame has gone global, his snacks have not. At least these days we have international online shopping, even if it does get a bit weird at night.

4. Figuring out where to start

Usually this is an easy enough thing to sort out for a show, but when you’ve had a run like Doctor Who — with new faces, big breaks, one offs and half a century of episodes to sift through — starting at the beginning isn’t necessarily mandatory. Although we guess the bigger dilemma is whether to hit up the classics first, or start from the reboot. Tricky, tricky.

There’s your first Doctor, and your favourite Doctor. And while they can sometimes be the same, after 51 years and 12-13 incarnations there are a lot of options for the title. It doesn’t help that just when you think you’ve settled on your pick, a new one comes along.

The constant turnover of Doctors and companions has been a staple of the series from almost the very beginning (necessitated by William Hartnell’s health and a fandom that wasn’t, and isn’t, ready to let go). But knowing that a sad farewell is going to come eventually never makes it any easier.

It also doesn’t help that every once in a while a favourite character make a (usually emotional) reappearance, plunging us back into the despair we had only started to recover from. Healing takes years, guys. And even then moments like this can still cut us deep.

For those who lived through classic Who, this isn’t that much of an issue. But for those of us who weren’t gifted with life until long after the show’s debut, the fact that some of Hartnell’s reputedly best work as The Doctor has been lost forever means we just have to take someone’s word for it. And quietly resent our life lottery.

9. Trying to put all the clues together

There’s always something brewing in Whoville, but thanks to the show’s obvious affection for slow, slow burns, we’ve actually started suspecting Every. Single. Line. of being some secret hint. Paranoia like this just doesn’t make sense in the real world.

Then again, getting lost in time and space has never felt so good.