You, you, you, oughta know …. that Canada’s grunge rock goddess Alanis Morrisette is getting inducted into the Canadian Music Hall of Fame at this Sunday’s Juno Awards on CTV.

All jokes aside, we’ve all fallen head over feet (there go the jokes again!) for Alanis at one time or another, simply due to the fact that she has gone through one of the biggest transitions in Canadian music history. Just observe the number of different Alanis personas we’ve seen her embody (with or without clothes!) over the years. From child star to
grunge queen to God to Mother Earth, girl’s embodied it all.

She CAN Do That on Television Alanis

Isn’t it ironic that a girl who’d soon enough tell us about going down on guys in theatres got her start as a child star on You Can’t Do That on Television? It’s actually not ironic really, much like many of the things Alanis sings about in “Ironic,” but it’s certainly super weird and awesome of her. Even if the boys on the show weren’t into her shorter haircut, which was iconic in its own right!

Before she became mega famous for her rock persona, Alanis was Canada’s answer to Paula Abdul with pop songs like the steaming pile of … awesome (see: the video above) “Too Hot”! Check out her amazing oversized blazers and superb clap-dancing! This is total Lisa Turtle meets Janet Jackson stuff, which is a higher than high compliment.

While “Too Hot” Alanis was pretty damn cool, she would prove no match for the Alanis we’d meet next. In 1995, Alanis released Jagged Little Pill and made it super big with everyone from angsty teenage girls looking for a way to mourn the loss of Jordan Catalano through song (hands up, everyone!) to …. well, Uncle Joey. 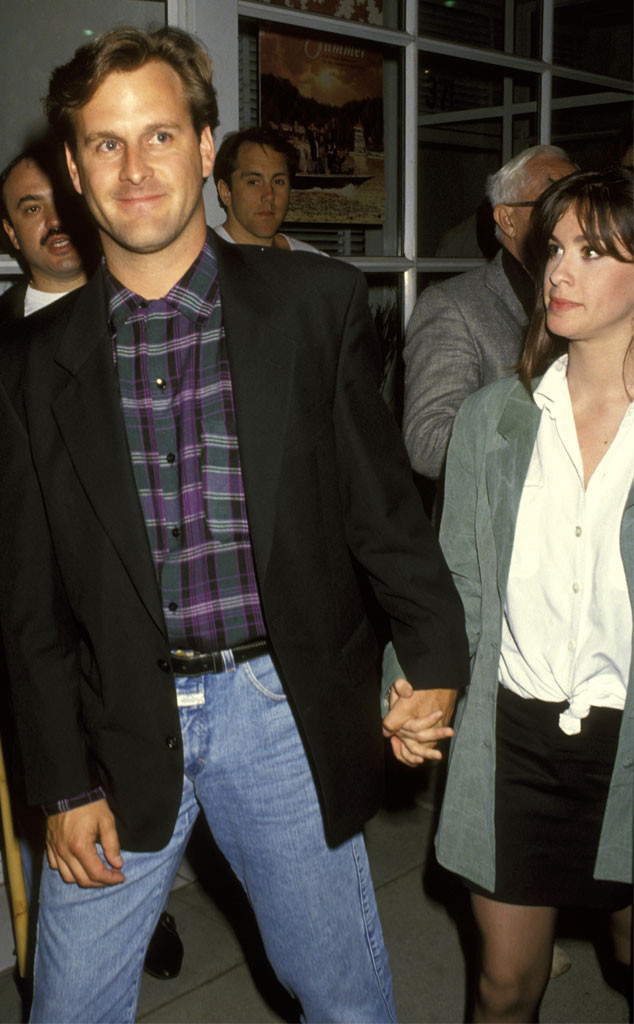 Seriously, let’s not forget that Alanis dated Dave Coulier or that she wrote “You Oughta Know” about him. We think we know who won that battle for the ages.

Technically an extension of the Pill-Popper Alanis era, but also its own thing because although “Ironic” was the third single off Jagged Little Pill (trivia: there were six — SIX! — singles total from that piece of gold), it was also the most popular. This is when Alanis challenged us to try and remember what we didn’t learn in middle-school English class. It kinda backfired when we realized her definition of “irony” was slightly off-kilter. Who would have thought? IT FIGURESSSS. 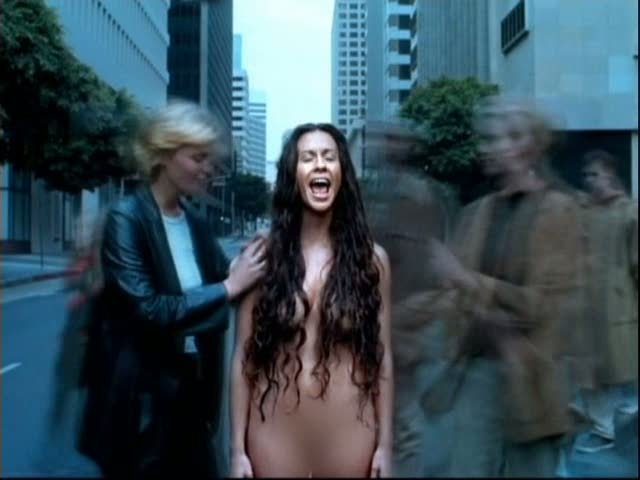 How do you follow up one of the most emotionally naked albums of all-time? By legit going naked in the video for the first single from your next album (Supposed Former Infatuation Junkie), of course! This was what Alanis did with “Thank U” and we are still trying to figure out how to thank her and her long, mermaid of rock hair.

After Supposed Former Infatuation Junkie failed to be as big a hit as JLP, Alanis decided to go naked again, this time in terms of musical instruments. She went on MTV and performed her hits acoustically and made it into an album and it was beau-ti-ful. No wonder she released JLP (we’re short-forming it and just deal, OK?) in acoustic form years later.

As if we didn’t already consider Alanis an alternative God, Kevin Smith cast her as just that in his 1999 religious comedy about the fallen angels that are Ben Affleck and Matt Damon. The former Catholic girl with a foul mouth obviously impressed. 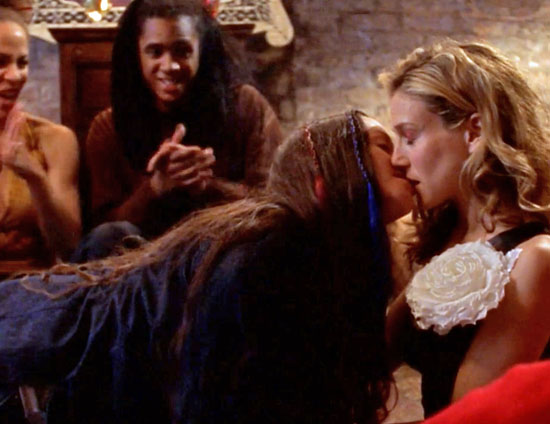 Alanis also opened up to screen audiences (most literally) when she planted one on Carrie Bradshaw on Sex and the City. Carrie wasn’t super into the kiss, and ended up leaving her younger BF after it. But hey, as Alanis says, “you live, you learn!” 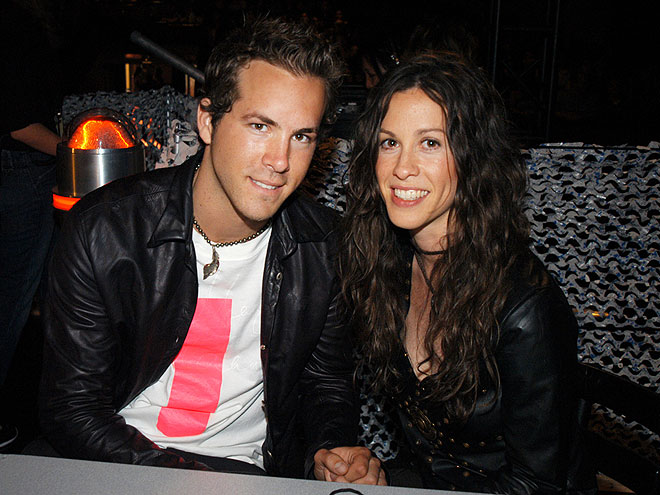 Guys, Alanis dated one of the hottest dudes on the planet from 2002 to 2007 (!!!). They apparently met at Drew Barrymore’s b-day party and the rest is strangely attractive Canadian history. Sure, they went on to marry different people (Mario “Souleye” Treadway, and Scarlett Johannson followed by Blake Lively, respectively), but let’s remember the good times, shall we? 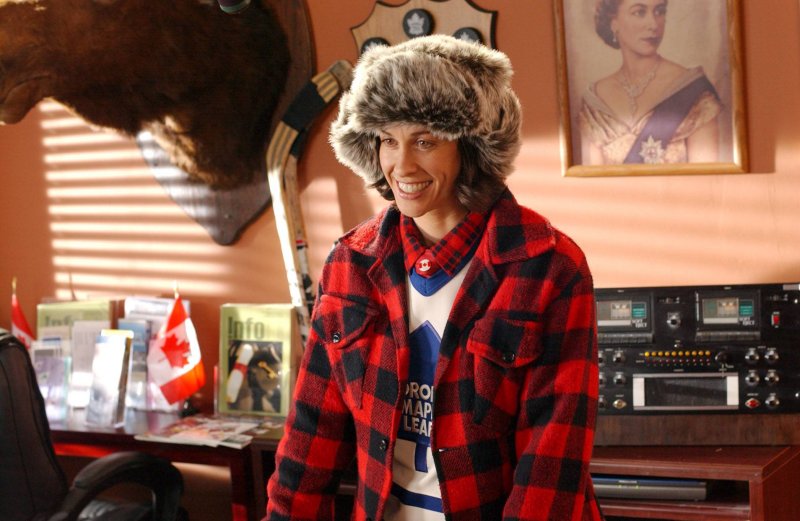 2005 was about the roots for Alanis. Girl released the 10th anniversary acoustic version of Jagged Little Pill and returned to Canadian TV and starred in a super duper meta episode of Degrassi directed by Kevin Smith. She played the plaid-wearing, Leafs-loving fictional principal of our most famous high school, thus fulfilling the fantasies of any now-grown teen who got caught listening to JLP in homeroom.

Getting Over “Humps” Day Alanis

If we didn’t have enough proof that Alanis knows how to deal with break-ups, shortly after leaving Ryan Reynolds our girl release this slow parody of the Black Eyed Peas’ “My Humps.” What’s not to lurve about this — and the fact that she followed it up with a new album?

How I Met Your Mother character Robin Sparkles got her start on a children’s show (Sparkles & Glitter, as opposed to You Can’t Do That on Television), made it big with a fluffy hit (“Let’s Go to the Mall” vs. “Too Hot”) and then transitioned into an angsty, grungy rock star (Robin Daggers vs. Jagged Little Pill and Onward Alanis). Sound familiar? We’re sure Alanis thought so too. 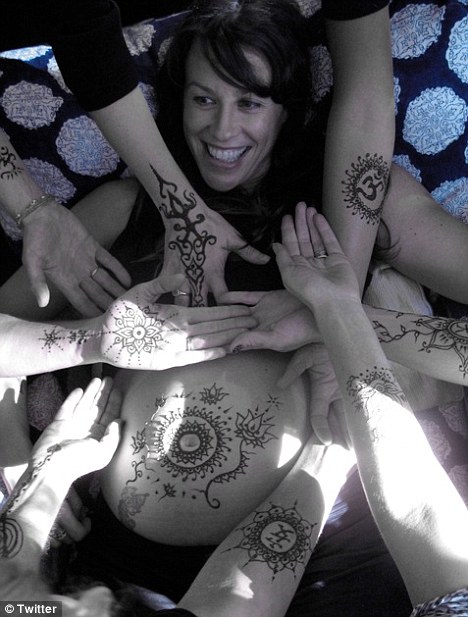 Almost six months after getting married to her second hubby, Mario “Souleye” Treadway, Alanis had a baby Alanis (a.k.a. Ever Imre Morissette-Treadway). She immediately became a New Age mama, rockin’ henna tats during pregnancy and just being super chill and cool.

To this day, she posts pics of her breastfeeding like it’s no biggie. Cause it ain’t when you’re Earth Mama Alanis.

Sadly, we don’t have photos of Miss Morissette getting the highest honour in Canadian music yet. So, we’ll just leave this feelings-filled bit from the “Head Over Feet” video here as an advance reaction gif.